The store will not work correctly in the case when cookies are disabled.

Get The Facts About IBS Irritable Bowel Syndrome is a gastrointestinal disorder categorized by abdominal pain and bowel irregularity and it affects around 10-15% of Americans - with more women affected than men. It is the most commonly diagnosed gastrointestinal condition. Though treatable and manageable, the symptoms which include abdominal pain, diarrhea, constipation, gas, cramping and bloating can become quite burdensome.

IBS symptoms can occur at any time of the day, and the impact of IBS can vary depending on the severity of the symptoms. Although not considered to be a threat to your overall health, the burden of the syndrome can be quite taxing on day-to-day living. In many cases, the symptoms significantly impact a person's social and professional life, due to the unpredictability of IBS and the sensitive nature of the syndrome. Developing hands-on strategies and a long-term treatment plan can help significantly in managing the syndrome. There are 3 general classifications of irritable bowel syndrome including constipation-dominant IBS (IBS-C) which accompanies infrequent and pellet-like bowel movements. With discomfort and pain in the abdomen, symptoms include straining and uncomfortable pain. Many women experience more prominent symptoms while menstruating.

Diarrhea-dominant IBS (IBS-D) is characterized by an urgency in defecating, loose and frequent bowel movements accompanied by abdominal pain. It is not uncommon for individuals to lose control of their bowels and soil their clothing, which makes living with IBS-D extraordinarily challenging and difficult.

IBS-A or IBS-M is characterized by an alternating/mixture of constipation and diarrhea symptoms - an inability to empty your bowels followed by an urgency to have a bowel movement - or in the reverse. Symptoms may be experienced on the same day, week or month with no way to predict the rhythm of which symptoms you will be experiencing at any given time.

How Is IBS Diagnosed? There are no specific tests to diagnose IBS. Many call IBS the diagnosis of exclusion. In making a diagnosis, your physician needs to be sure to rule out other diseases such as colon cancer, Crohn's Disease, and Celiac Disease and will want to identify a pattern of recurring IBS symptoms. Your doctor will likely request a stool sample to look for blood and parasites, and may also order a blood workup and colonoscopy. If a diagnosis is unclear, you may be referred to a gastroenterologist for further assessment and treatment especially if you are experiencing IBS symptoms over an extended period of time, or a treatment plan is not helping to control your symptoms.

Keeping a detailed diary of medications, foods and beverages, and bowel movements will help considerably in understanding the patterns of IBS. It is instrumental for your physician to understand the interplay of all the symptoms in making the diagnosis to build a treatment plan. Since the triggers of IBS ultimately individualized, a diagnosis can be challenging and is rarely made quickly.

IBS is a complex health condition with a wide range of triggers; there is no one known trigger for IBS. To avoid a flare-up, efforts to determine your own body's reactions to foods that cause diarrhea, constipation or severe abdominal pain is key.

Common trigger foods are legumes and beans, dairy foods, chocolate, and certain fruits and vegetables including apples, watermelon, cabbage, broccoli and cauliflower. Spicy and deep-fried foods, as well as, caffeine are also known to irritate the intestines. As a general rule with IBS, drinking water and staying duly hydrated is crucial along with identifying which foods cause your adverse symptoms.

There is no known 'specific' cause for IBS, although many factors play a role. The intestinal tracts for individuals with IBS are more sensitive - causing abnormal muscle spasms, contractions, and pain overall. IBS is also associated with a change in the bacteria in a person's intestines. Those at risk for IBS are young individuals under the age of 50, females, individuals with a family history of IBS, and those who suffer from frequent stress and anxiety.

Many research studies have pointed to the ways in which stress and anxiety are contributing factors that aggravate IBS symptoms. Each triggers the other when the balance of the brain and the gut are disturbed causing havoc in the gut with diarrhea and/or constipation. Chronic stress causes inflammation in the intestines, worsening the symptoms associated with IBS. Many individuals who suffer from IBS will turn toward alternative therapies including yoga, meditation, and biofeedback in efforts to manage stress and anxiety effectively.

What Can Be Done?

Preventing IBS attacks hinges on the dietary habits you follow and also managing your stress. Avoid foods that trigger your symptoms. It is also important to make sure you get enough sleep each night and find ways to alleviate your stress. Increasing the amount of exercise you partake in will also benefit you greatly. 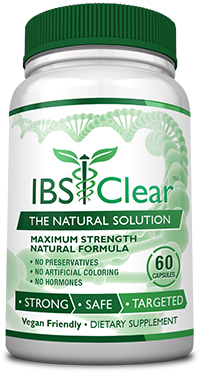 We're so confident that IBS Clear™ will work for you, that we are pleased to offer a 60 day Risk Free Money Back Guarantee!

You have 60 days, no risk, to try IBS Clear™ . If you are not 100% satisfied with our product, you may receive a refund (excluding shipping charges). Please read the return policy for more details. If you wish to take advantage of the price discount by ordering multiple bottles,please call before the end of the 60 days. All bottles, both used and unopened, must be returned within the 60 day guarantee period to be refunded.

After testing our product, having excellent results from our previous customers and receiving new success stories daily, we know we can offer to our customers this money back guarantee.

Out of all of the products sold, less than 1% of our customers have requested a refund. This means our product works!

Security when ordering IBS Clear™ :
IBS Clear™ uses the top technology in credit card protection. You can feel safe ordering from IBS Clear™ . All purchases are 100% encrypted and secure.

Discreet Packaging :
Your privacy is important. All packaging is 100% discreet and has no mention of the contents inside.